Get to know an important part of the archaeology of Gran Canaria.

All those who visit the island of Gran Canaria usually come for two things: the sun and beaches. However, they forget that the island offers much more in the sense of leisure, culture and history, as evidenced by the numerous caves in Gran Canaria.

This island has a very important aboriginal past, with a culture that has been preserved over the years until the present day, very different from what can be found in other peninsular territories.

Apart from the wide range of archaeological sites that Gran Canaria has to offer, you’ll also find a wide variety of museums scattered all over the island, which act as a magnificent complement to what you can see in the different caves.

Today, we want to highlight and show you the most cultural and historical side of the island, offering you all the information about the best caves to visit in Gran Canaria and to discover the rich natural heritage of the island of the canes.

Gran Canaria is an island that has a large part of all the archaeological sites in the Canary Islands, closely followed by the island of Tenerife.

At the moment, there are approximately 132 sites catalogued. However, this data is sure to change in the coming months or years.

Thanks to the numerous excavations and research carried out every year in the caves of Gran Canaria, as well as the economic contributions of both public and private institutions, we can enjoy this little piece of history and nature on the island.

Now, we’re going to show you what, in our opinion, are the 5 best aboriginal caves in Gran Canaria. If you visit the island, you cannot miss and discover the cultural and patrimonial legacy that is hidden in the geography of Gran Canaria.

We couldn’t begin our ranking in any other way than with this true jewel of the Canary Islands' natural heritage.

The Cueva Pintada is the symbol of the island and one of the most important archaeological sites in the Canary Islands. Located in the emblematic village of Gáldar, the first town on the island, it’s considered to be the oldest cave dated to date.

It was discovered in the 19th century by pure chance thanks to the villagers who, while strolling in the vicinity, came across a cave containing cave paintings.

Today, it’s a large area converted into an archaeological museum, where the Cueva Pintada is the main attraction. In recent years, aboriginal settlements have been discovered around it, allowing us to continue discovering how the ancient inhabitants of the island lived.

Cuatro Puertas is a group of caves in Gran Canaria that has recently become very popular, becoming one of the star sites due to its uniqueness and privileged geographical location.

Located in the municipality of Telde, at the top of the Bermeja mountain, it’s striking as soon as you arrive at the site because of its famous Cuatro Puertas (four doors) that welcome you to the place.

Thanks to this cave, it has been proven that the ancient aborigines performed religious rites, guided by the stars or asked the gods for a better harvest.

If you want to contemplate a dreamlike sunset and see the stars, this is undoubtedly the ideal place to do so. 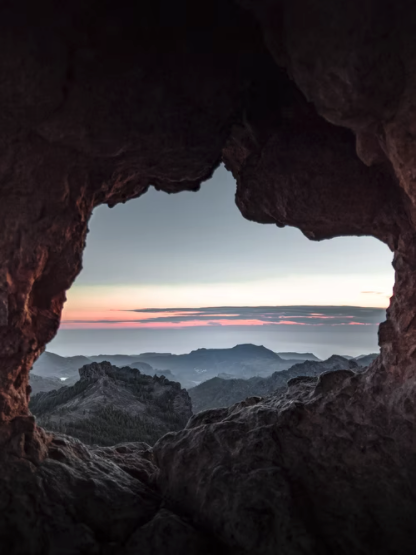 We return to the northern part of the island and do so with another important archaeological site on the island. Cenobio de Valerón is located in the municipality of Santa María de Guía.

It’s a cave excavated in the rock of Gran Canaria. It’s one of the most significant sites because it reveals how, in pre-Hispanic times, it was used as a granary to store cereals and food. The choice of location is no coincidence, as the rock has the ideal temperature and humidity to preserve food.

To get there, you have to leave your car in a small car park at the foot of the mountain. The access on foot is a short and pleasant walk where you’ll be able to contemplate wonderful views of the entire north coast.

This is perhaps one of the least known and least visited caves on the island. Acusa Seca have a special charm. They’re located in the Cuenca de Tejeda, in the interior of the municipality of Artenara, and have 6 different settlements.

Within these settlements, we find a group of approximately 40 caves, most of them dwellings where aboriginal remains were found.

To make the most of the experience in this cave in Gran Canaria, we recommend that you take a short hiking route through the area, where you can discover the small chapel of San Juan, or spectacular views of Roque Nublo and Roque Bentayga.

Declared a World Heritage Site by UNESCO, Risco Caído has become the latest major addition to the list of important and decisive sites for the study of the history of the Canary Islands.

It’s a group of 21 caves carved out of volcanic rock which, according to some researchers, is an architectural structure that was designed especially for storing food or farm implements.

However, for other researchers, Risco Caído was a sacred meeting place where the Faycanes (priests) performed rites and celebrations.

You cannot leave the island without visiting this marvellous spot, full of history and nature through the hiking routes that will make you integrate yourself in a special way in the Cultural Landscape of Risco Caído.

Gran Canaria is an island which, as you’ve seen, is much more than sun, beach and leisure. It’s an island that breathes history all around, with history and a very rich natural heritage, which we must preserve to be admired by the inhabitants of the island and the people who visit the island every year.

In conclusion, if you want to get to know the history of the Canary Islands in depth, to know where its customs and the best caves of Gran Canaria come from, the best thing to do is to stay at our Dunas Hotels & Resorts and explore the rich ethnographic heritage that our ancestors have left us and which, in one way or another, is part of our present and future.