This island is more than just sun and beaches. Discover the different landmarks with our guide.

The monuments in Gran Canaria, apart from their enormous value, also are truly beautiful. You’ll want to stop just to admire them. In fact, any walk by the historic centres and villages of this island is full of historic buildings.

Every corner of the island adds up to generations and generations of islanders: a historical past that blends five centuries of European history, a prologue to the transatlantic voyages and the expansion of Spain on the American continent. 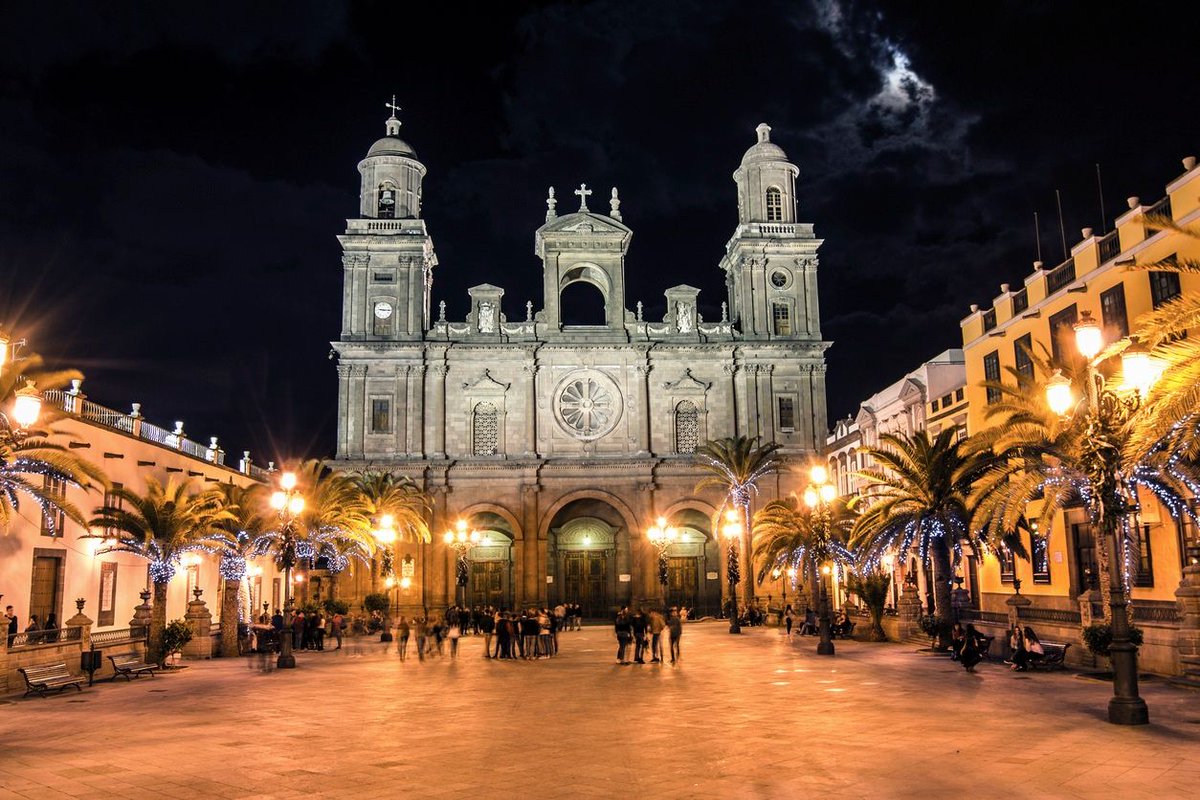 Here, close to where Christopher Columbus stopped in 1492 on his first voyage to the New World, stands the Cathedral-Basilica known as Santa Ana Santa, in honour of the patron of this city with more than 500 years of history.

It was built by order of the Catholic Monarchs after the conquest of Gran Canaria in 1503 but was not completed until almost four centuries later. Logically, several architects and artists contributed to its construction, resulting in three different styles: Gothic, Renaissance and Neoclassical.

Its interior holds the Diocesan Museum of Sacred Art, which exhibits valuable objects of sacred art, paintings, and an important collection of sculptures. There is also a lift to the top for breathtaking views over the city. 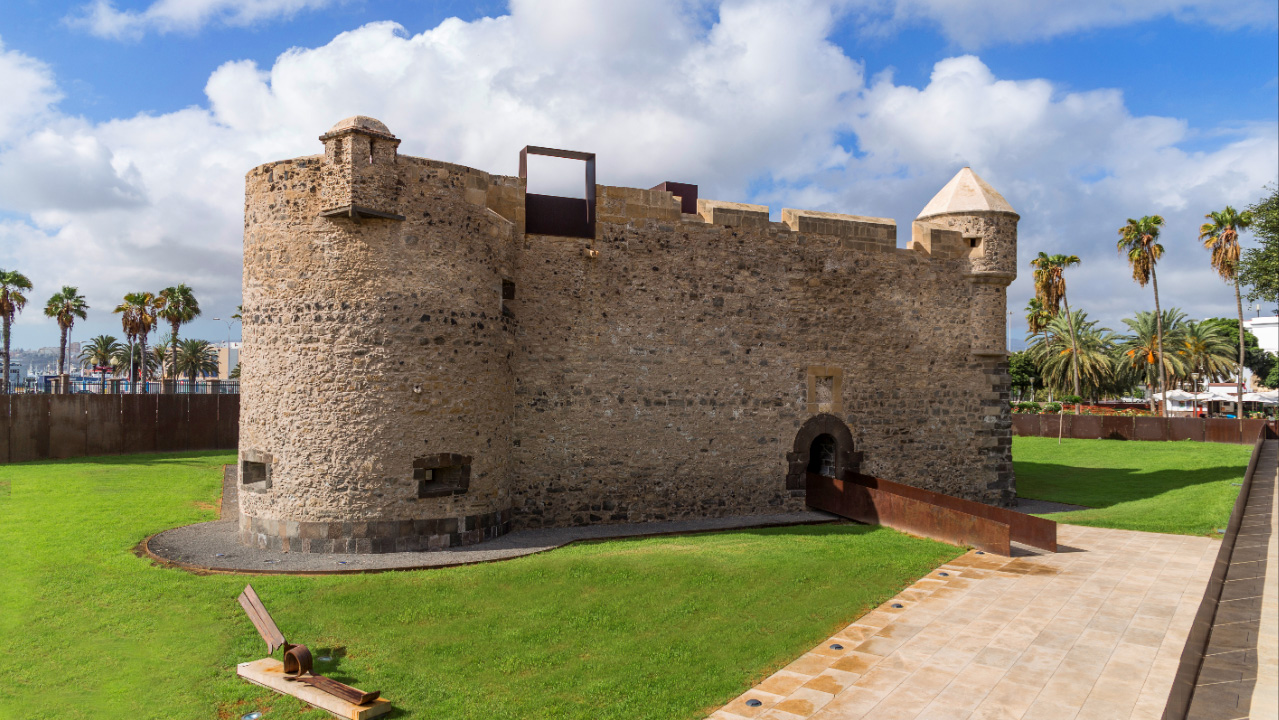 Another of Gran Canaria's must-see monuments is the Castillo de la Luz, the oldest fortress in the Canary Islands, erected in the late 15th century as a defence against Dutch and English pirates.

Declared an Asset of Cultural Interest, today it’s one of the most significant buildings of the capital's architectural heritage and a symbol of the seaside neighbourhood of La Isleta.

It is currently the headquarters of the Martín Chirino Foundation of Art and Thought and is also worth a visit for this reason, as it holds a permanent exhibition of 25 unique pieces by the well-known sculptor from the island.

From the 18th century onwards, it acquired a symbolic character, until the building was declared an Asset of Cultural Interest in the mid-20th century. 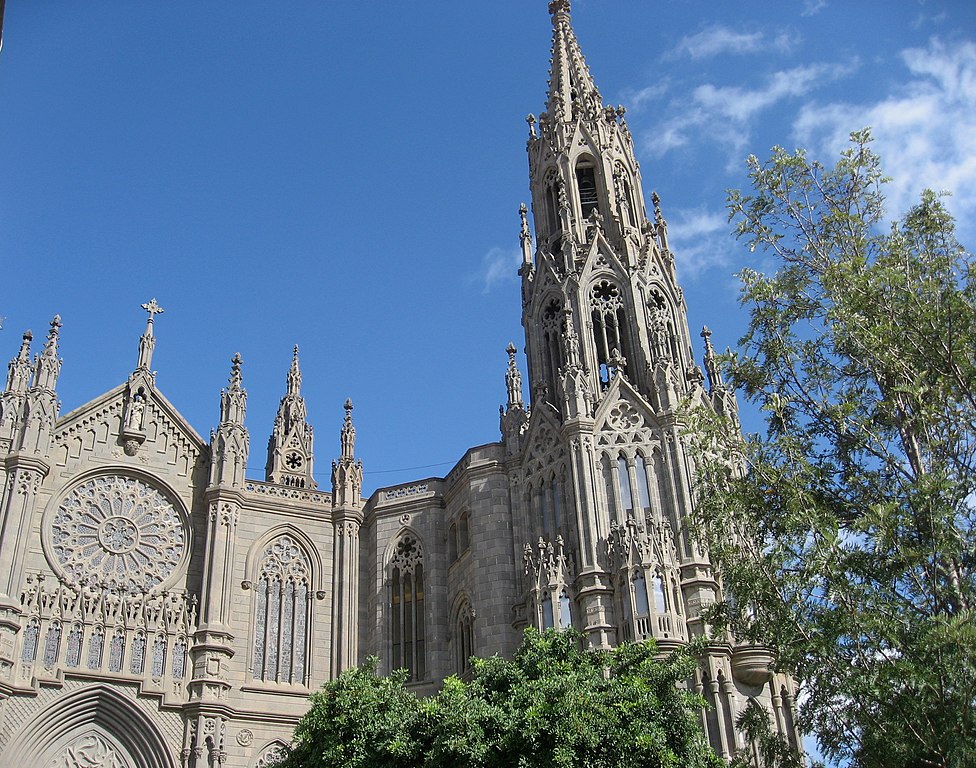 Within the historical-artistic heritage of the municipality of Arucas, the Church of San Juan Bautista or Arucas Church, a temple that people have renamed cathedral since its reconstruction at the beginning of the 20th century, is particularly noteworthy.

It was sculpted entirely in stone of Arucas by local master carvers and is neo-Gothic in style. It has an important artistic treasure, with sculptures of Italian origin, paintings from the Flemish and Andalusian schools and beautiful stained-glass windows. 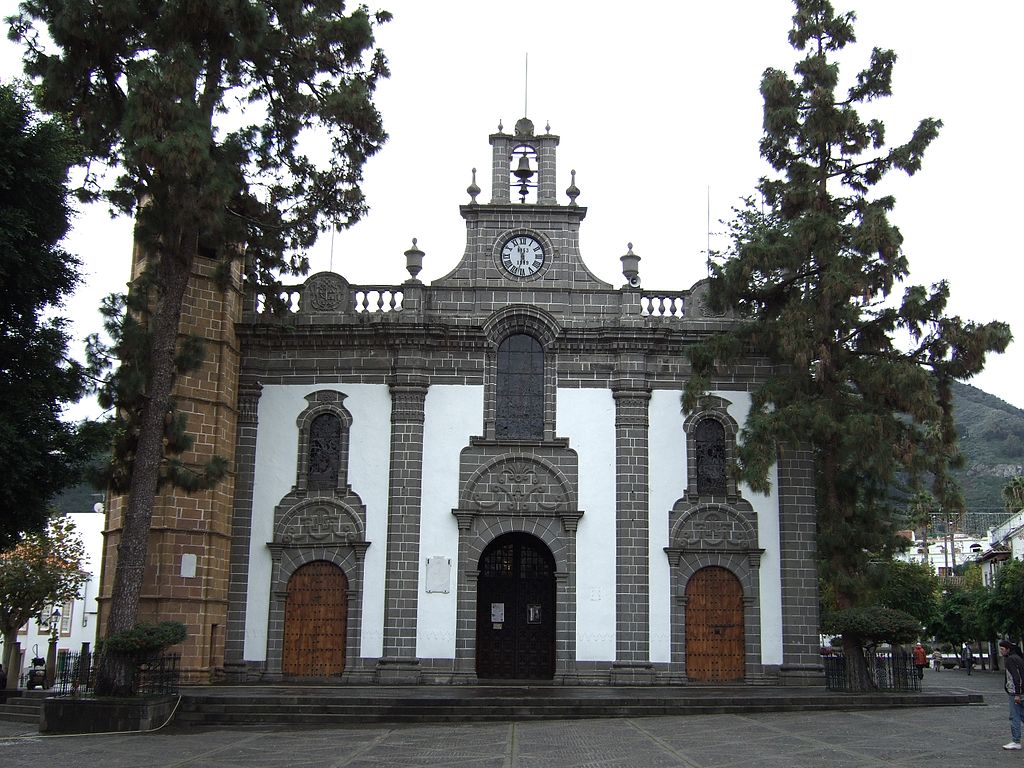 One of the monuments par excellence in Gran Canaria is located in Teror, a place of pilgrimage for all the people of Gran Canaria, as the municipality is home to the Basilica and Marian Sanctuary of Nuestra Señora del Pino (Our Holy Madonna del Pino), the patron saint of the Diocese of the Canary Islands.

Every 8th September it receives thousands of visitors who come to Teror to see the Holy Virgen del Pino. It’s located in the Plaza del Pino and its construction dates to 1767, although it has had to be restored several times since then.

The current church, with a gabled roof, has three naves with fourteen semicircular arches supported by columns and pilasters. Its façade opens into three doors, and its sides have two entrances, large windows, and stained-glass windows. 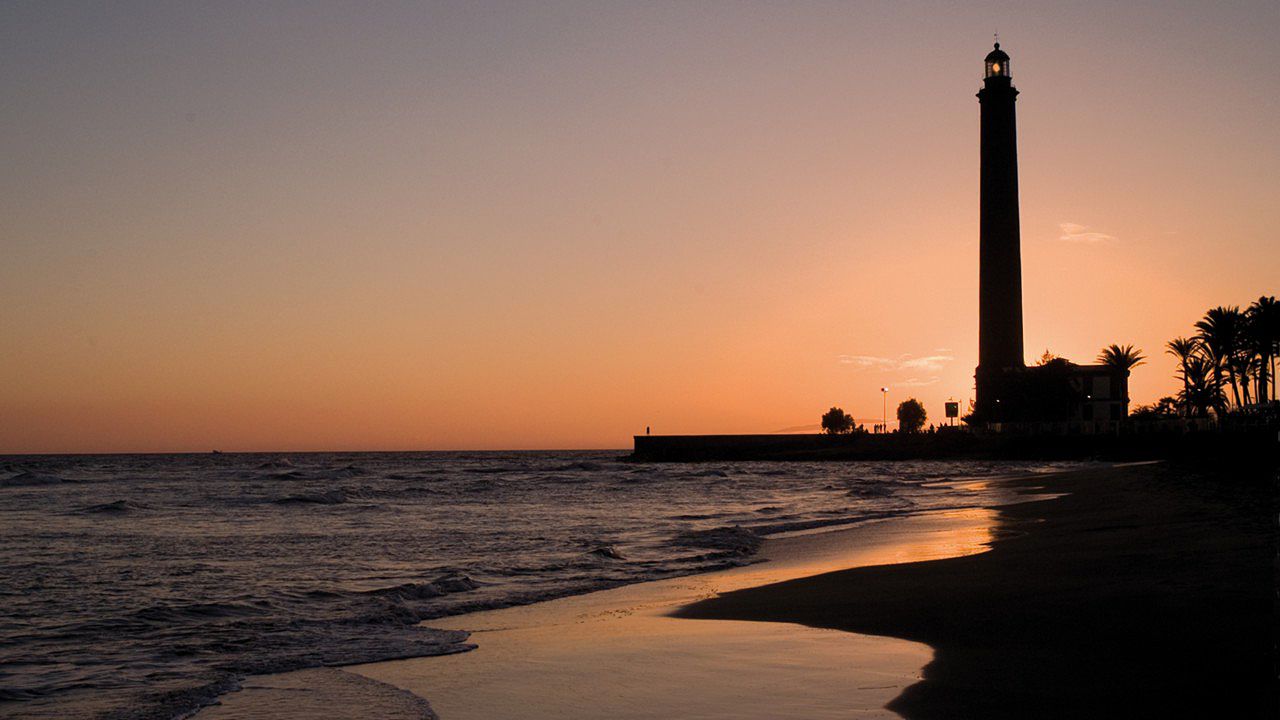 The tourist resort of Maspalomas, in the south of Gran Canaria, is not only known for its majestic dunes which run along the sea or for its good climate. It’s also known for its old lighthouse, which has seen the arrival of the first tourists and the conversion of the area into a holiday resort.

The decision to build it was taken in 1861, and the work took 28 long years. At that time, the place was an uninhabited spot, cut off from the rest of the island. Thus, for its construction, 55 metres high, a loading bay was built to unload the materials that could only arrive by sea.

It’s one of the most recognizable monuments of Gran Canaria and its light was switched on in 1890, serving as a guide for the ships that covered the routes between Europe and America. It was the only building at the end of a long line of sand that began at what is now Playa del Inglés and ended near the natural pond La Charca de Maspalomas. 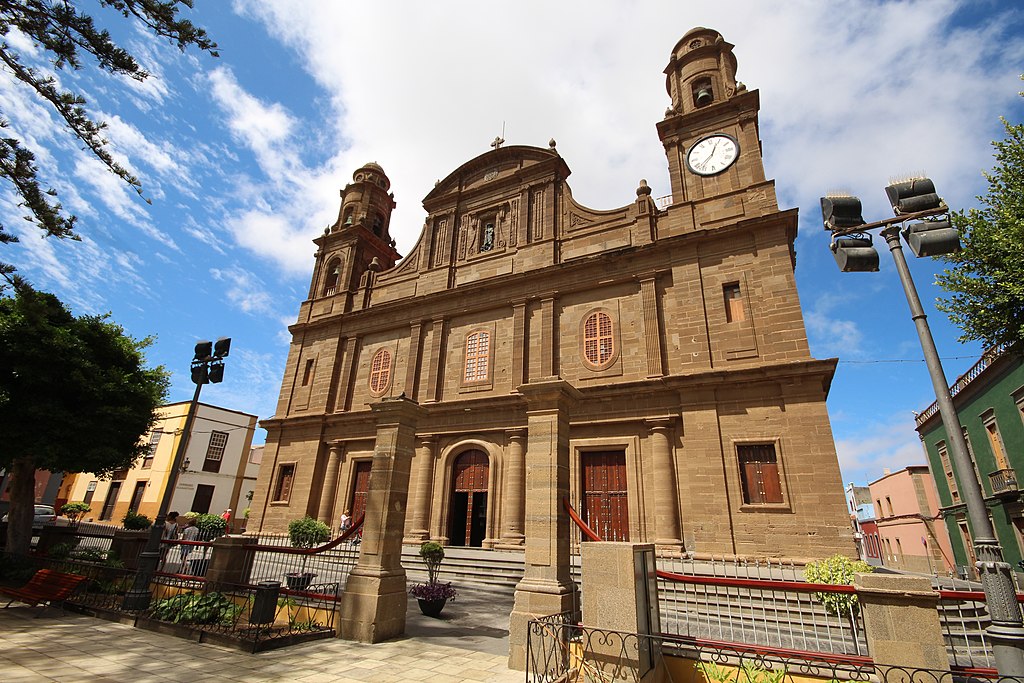 The Church of Santiago de los Caballeros de Gáldar, one of the most beautiful churches in the Canary archipelago, is the bridge between the Baroque and early Neoclassicism styles of the Canary Islands and the first Jacobean site outside the Spanish mainland.

The dedication of the Jacobean Temple is linked to the presence of the Castilian conqueror Alonso Fernández de Lugo and later the first Adelantado Mayor of the Canary Islands, who placed all his enterprises under the tutelage of Santiago, patron saint of Spain.

Interesting works of art such as the Pila Verde, where the first aborigines of the Canary Islands were baptized, have been preserved from the 16th century church that no longer exists. Inside you can see several pieces of considerable value in painting, sculpture and gold and silver work.

As a curiosity, Gáldar is the last stop on the Way of St. James (Camino de Santiago) in Gran Canaria, the only one that is 100% recognized, except for the routes that lead to Santiago de Compostela.

And to fully rest after a day of monumental tourism, there is nothing better than choosing any of the Dunas Hotels & Resorts accommodation:


As you’ll have seen, there are a lot of different monuments in Gran Canaria. They’re a product of the interesting history of an island strategically located between three continents: Europe, Africa, and America.